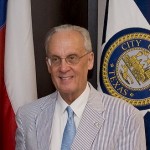 Everyone that ever met Peter Brown is grieving his departure from planet Earth this week.

We know that he is in his pedestrian utopia with wide sidewalks, clear wayfinding, well-designed tree-lined streets and intersections with safe crossings.

I first met Peter Brown in the 1980’s. At that time Peter was very involved with the city on visioning and planning for long-term designs of Houston. He was so ahead of his time in worrying about flooding and design that did not encourage quality of life. In fact, it may be that I first learned that phrase from Peter – quality of life. Who cared? Very few as it was the bottom of the 80’s oil boom. We just needed to survive.

As a young woman, I would listen to Peter envision the city that I live in today. It’s hard when you are young to think past the next day, much less 30 – 50 years down the road. But Peter was always looking forward.

Peter never stopped looking forward either. From pushing for mobility to pedestrian pathways to improved parks and urban spaces.

Off and on for years, Peter and I would meet about once a quarter for breakfast at the Avalon Diner. First and foremost, Peter always cared about the person. He would want an update on life and self and would share his as well. Then, he would start telling me visions and ideas.

When Peter first announced he was interested in running for public office, I challenged him. I thought he was too pure and too visionary to be corrupted by public office. Once again, my friend Peter proved me wrong. He held tight to his steadfast beliefs and was a servant leader, always focusing on what was best for Houston. He embedded the term “quality of life” in the governance of the city.

I am so grateful that I had some time to visit with Peter in his final weeks. We talked a little politics and then I shared my idea to start a non-profit on sidewalks when I shift gears in the future. Even while not feeling well, he had me tightening up the idea and telling me what I needed to do to make it happen. He then told me, “Let’s do it!” I’m not ready yet, but will get there in the future.

Meanwhile Peter, we miss you with all our hearts.

To the Brown family, our thoughts and prayers are with you. Know that grief is a part of the process and that many more are grieving with you. Take your time to feel the pain and then remember your treasures and fondest memories.