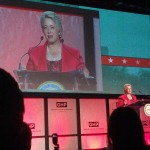 The Mayor presented her annual State of the City address today.  This was her fourth time to take the stage for this annual event hosted by the Greater Houston Partnership and her experience was evident.

Clearly, Mayor Parker was ready for this speech and did one of the best jobs ever with her presentation.  She was focused, her timing was right and the applause lines were well-placed.  She appeared strong and confident.

All of this was a good thing as the speech sounded a bit more like a campaign speech than it did a city update.  Oh, don’t get me wrong, she included all the numbers and data that were relevant but the speech had a zing to it.

The announcement I liked best was the launch of “tweetMyJobsHouston” app.  Click here.     This app, available on Apple and Android platforms, allows you to find available job openings.  The Mayor demonstrated it with enthusiasm and illustrated it on the screen for the crowd of more than 1500 gathered at the Hilton Americas downtown.

She also announced a business plan competition that she is hosting with Capital One.  It will allow Houstonians to utilize resources at the libraries and through the Office of Business Opportunities to present their ideas in a solid business plan.  There will be 3 winners selected and awarded cash prizes to help launch their new businesses.

The Mayor took lots of credit for Houston’s booming economy and recited a number of the accolades the city has been receiving in national media.  She went through a long list of accomplishments that included everything from crime and safety to sustainability and quality of life.  It was comprehensive.

Meanwhile, her opponent in the upcoming Mayoral election – Ben Hall, was working the crowd aggressively.

This blogger thinks the race is on!  We’ll be keeping you up to date as we ponder the campaigns for Mayor and City Council.